The study of lighting ergonomics abroad has a relatively long history. The conclusion shows that the human eye’s perception and sensitivity of LED light effects are subtly different from traditional light sources. If you do not understand this difference, you may not be able to use the LED to bring us comfortable lighting. For example, what kind of light efficiency is more efficient? Why LED lighting has more glare?

First of all, from the human eye cells.

The reason why cone cells can see the “color” is that they have three kinds of “green, red and blue” cells. With the RGB primary colors, we can see all the colors including white. However, there is only one kind of rod cells, so the color cannot be seen.

What needs to be corrected is that the so-called “red cones,” “green cones,” and “blue cones,” just mentioned, are inaccurate. The cells themselves do not have these colors, but they are just for red light. Green and blue light sensitive.

In addition, the degree of activity of cone cells and rod cells depends on the strength of light. If the illumination level is high, the cone cells work efficiently, and the rod cells are very inactive. When the illumination is very low and very dark, the cones are not active. Therefore, under very dark conditions, we use rod cells to observe and see only black and white and no other colors in the line of sight. We will have data later to illustrate this point.

One interesting point is that blue light-sensitive cone cells only exist in the peripheral area of ​​the fovea, so it takes more attention to see the blue, which is why blue can attract more attention. . So the trademark with blue is a good choice.

In the past, road lighting fixtures had only one large light source, a large light source with uniform brightness and glare, and the visual cells only needed to transmit an edge message to the brain. Now using LED light sources, assuming that the road lighting conditions remain the same, but there are many small light spots on the luminaires, with a lot of edge information, which may be the reason why LEDs produce more glare than traditional light sources.

In general, the typical brightness range of road lighting is between 0.3-3 cd/m2. The brightness greater than 3 cd/m2 is the brightness category of indoor lighting or natural light lighting. 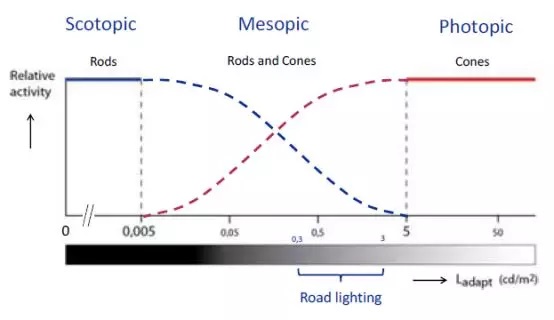 In the middle area where both types of cells are active, we call it intermediate vision. The road lighting is in this visual range, when the cone cells are more active than rod cells, but both are working. 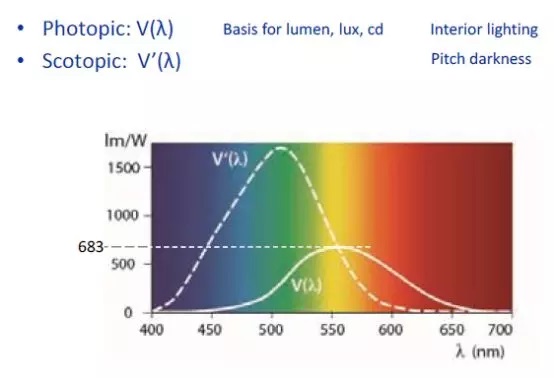 Note that in the above figure, the maximum sensitivity of the cone cell is in the yellow region of the visible light spectrum, while the punctuated cell represented by the dotted line is more sensitive and the peak is in the blue-green region. In contrast, cone cells are highly efficient for green, while rod cells are more efficient for blue light.

What is their efficiency in the middle vision? 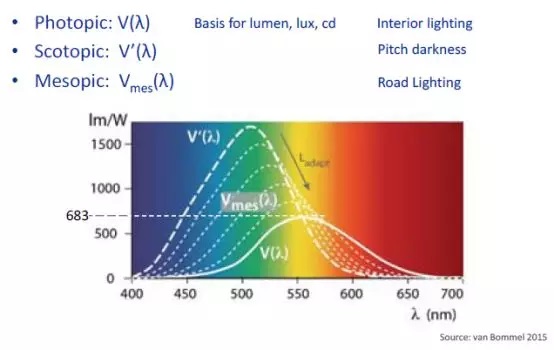 From a theoretical point of view, this point of view is indeed feasible. The 2017CIE report also made this clear. Using blue and white light can save about 2%-8% of light. But in reality, this practice is not necessary and may even cause new problems.

First, for example, a brightness of 0.3 cd/m 2 , if blue-white lighting is used, the lighting level can be reduced by 8%, 0.3 cd/m 2 by 8%, and the brightness can be reduced to 0.28 cd/m 2 . If you use blue light for indoor lighting, you can save 2%. In a few cases where the lighting level is already low, you can save about 8%. However, whether it is road lighting or indoor lighting, this light is simply not worth mentioning. You can even ignore this point of view.

In addition, if blue-white light is used, it will cause more scattering in the eyeball and the atmosphere, resulting in more light pollution. (As we mentioned earlier, Blu-ray will make the glare more serious.)

And, in order to save the brightness that is not worth mentioning at all, there will be a very bad visual experience for the elderly. Here we will talk about the lighting needs of the elderly.

What kind of lighting is more friendly to older people?

As you age, the lens of your eyes turns yellow. The yellow light can easily pass through the yellow lens, and the yellowish green can also penetrate. Even the orange and reddish can easily penetrate the yellowed lens. However, in the spectrum, blue is far from yellow and blue cannot easily pass through the lens of the elderly. Therefore, if the use of blue and white light is only to save 2% of light, or 8% of light, it may not matter to young people, but it is for the elderly to suffer!

In addition, if you want to design excellent lighting for the elderly, you can’t simply increase the light, because it may produce more glare. Therefore, to be very careful design, you must understand a lot of knowledge in this area. For example, blue light is bad for the elderly, while yellow light and warm white light are more friendly.