What type of light do plant grow need?

Plants’ demand for light is mainly embodied in three aspects of light radiance (intensity), photoperiod, and spectral distribution, which is also called the “light environment” for plant growth.
Compared with traditional plant grow lights (fluorescent lamps and high-pressure sodium lamps), LEDs can adjust the spectrum and radiation intensity according to needs. Secondly, LEDs are cold light sources that can illuminate plants at close range without causing burns; again, LED light sources The small size helps reduce the height of the cultivation layer and increase the cultivation density per unit space. Therefore, LED grow lights technology has been widely used in the field of agricultural lighting.

Photon flux density (PPFD, unit: μmol/s/m2): The number of light quanta per unit leaf area per unit time, which is consistent with the unit of photosynthesis rate and has a great impact on plant biomass and its growth rate influences.
Through the spectral distribution, the morphology and color of certain genotypes can be effectively adjusted.
The flowering time of some short-day and long-day plants can be effectively controlled by photoperiod or light duration.

These parameters are not independent or unique, but all these factors work together to regulate the overall growth of plants.

It is well known that factors such as temperature, humidity, root zone temperature, wind, moisture, nutrients, and oxygen/carbon dioxide levels play an important role in regulating plant growth. In addition to these factors, the light also plays an important role in the growth cycle of plants. Since the start of cultivation, all varieties of crops, flowers, and herbs have been cultivated in the sun. Therefore, the intensity, spectrum, and duration of sunlight affect their morphology, growth, and flowering in a natural way.

Plant biomass, morphology and flowering times can be controlled by regulating the light quantity, quality and duration

For humans, light reacts with the short, medium, and long photoreceptors in the eyes, allowing us to see colors. For plants, light reacts with chlorophyll and plant pigments to promote growth. For example, the chlorophyll absorption curve is mainly responsible for photosynthesis to promote plant growth. Plant pigments are sensors of plants that respond to the environment and adjust their shape.

The metrics of human vision cannot be applied to plant lighting because the lighting indicators of plants are essentially based on photons. For example, photon flux (PF) measures the number of photons emitted from a light source in μmol/s, while photon flux density (PFD) measures the number of photons reaching plants. Unless artificial LED lights are also used as conventional lighting sources, color attributes such as color rendering index (CRI) and correlated color temperature (CCT) are no longer relevant for plant lighting.

The absorption curves of plants are not the same as for the human eye. Different spectrum and metrics are necessary to quantify horticultural lighting

Plants convert light energy into chemical energy through photosynthesis.
Photosynthesis principle: Green plants have the ability of photosynthesis-with the help of light energy and chlorophyll, under the catalysis of enzymes, water, inorganic salts and carbon dioxide are used for photosynthesis, releasing oxygen, absorbing carbon dioxide, and producing organic substances such as glucose , For plant use. Among them, chlorophyll a and b have the highest absorption rate in the blue and red wavelength regions. Therefore, blue light 450nm and red light 660nm promote plant biomass and growth rate. 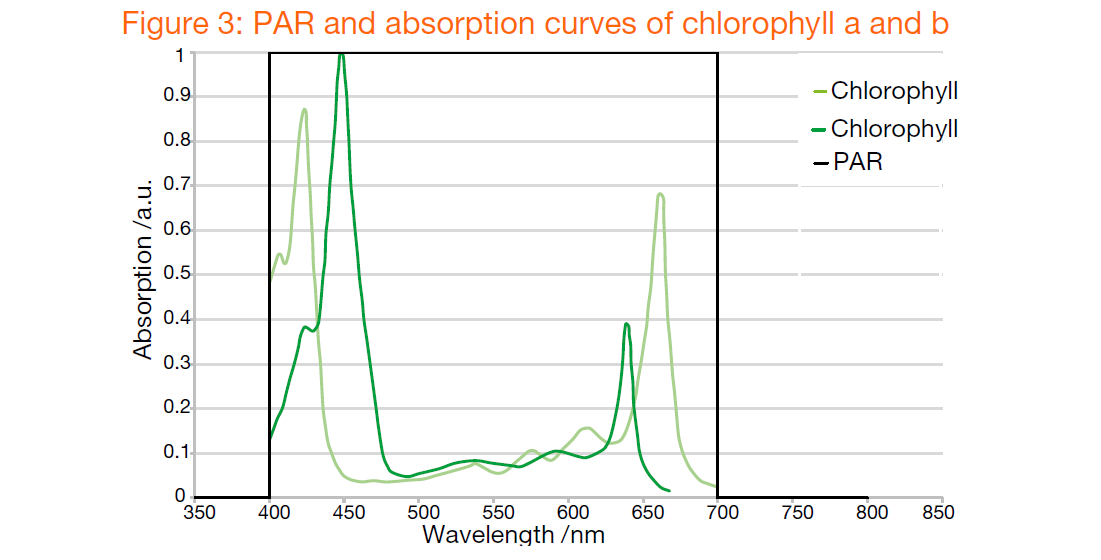 Photomorphogenesis: The process of forming the morphological structure of plant organs under light conditions. In order to be able to perceive the light intensity, light quality, light direction and photoperiod of the surrounding environment and respond to its changes, plants have evolved a photoreceptor system (photoreceptor). The photoreceptor is the key for plants to sense changes in the external environment. The main photoreceptor in the photoreaction of plants is phytochrome.
The photosensitizing pigments in plants exist in two relatively stable states: red light absorption type (Pr, lmax=660nm) and far-red light absorption type (Pfr, lmax=730nm). Phytochrome is a pigment protein that participates in photomorphogenesis and regulates plant development, and plays an important role in the entire growth and development process of plants from germination to maturity.

The light morphogenesis effect is regulated by applying a spectrum with a specific mix of 660nm and 730nm. Controlling the flowering cycle, without relying only on the influence of the season, is of great value for ornamental flowers.
The conversion of the phytochrome Pr to Pfr is mainly induced by the deep red light of 660nm (representing the sunlight during the day), while the conversion of Pfr to Pr usually occurs naturally at night, and it can also be excited by 730nm far-red light, as shown in the figure Shown. It is generally believed that the control of plant flowering by phytochrome mainly depends on the ratio of Pfr/Pr. Therefore, we can control the value of Pfr/Pr through 730 nm far-red light irradiation to more precisely control the flowering cycle. 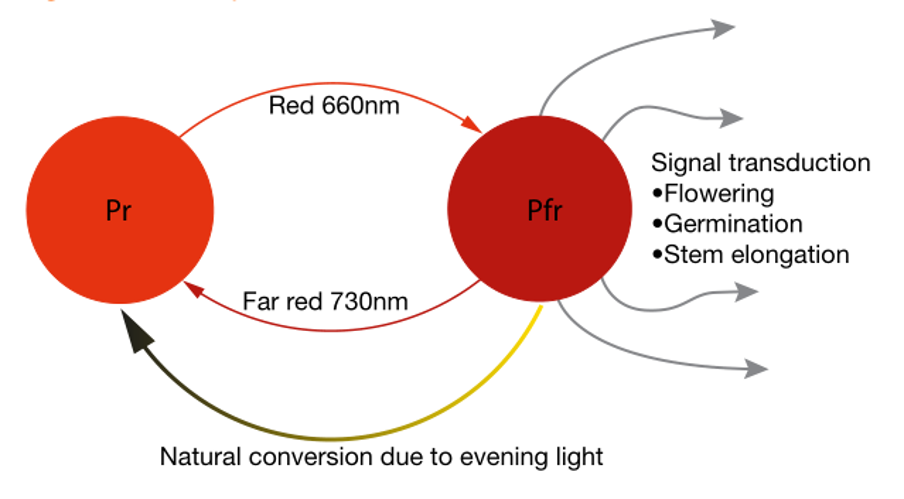 Auxiliary light: artificial light is added to the existing natural light.
Chlorophyll a and b have the highest absorption rates in the 450nm and 660nm wavelength regions, which provide energy for photosynthesis to promote plant growth.
Spectral distribution scheme: Use a photon flux ratio of 10% for dark blue LED (450 nm) and 90% for super red LED (660 nm).

Single light source plant lighting: as in a vertical farm, all lighting is produced by artificial light sources.
For this type of application, plant growth is the main goal, and the combination of efficient 660 nm red light and efficient white CRI 70 4000 K LED provides energy for the photosynthesis of plants.
Spectral distribution scheme: Use 80% white LED (CRI70, 4000 K) and 20% super red LED (660 nm) photon flux ratio.

Typical spectrum & auxiliary light to the germination of plants

Assist the flowering of light-filled plants: In order to induce flowering, far-red light content at 730 nm is required. Can be used to adjust the photoperiod of plants. Some plants only bloom when the day is less than 12 hours. Some are just the opposite, blooming only when a day exceeds 12 hours.
Spectral distribution scheme: Use 20% dark blue LED (450 nm), 60% super red LED (660 nm) and 20% far red LED photon flux ratio (730 nm).

The result of supplementary lighting plant lighting: In a vertical farm, all lighting is produced by artificial light sources.
In the result phase, a large amount of 660 nm light is needed to support photosynthesis. In addition, a small amount of far-red light at 730 nm helps to support fruit production.
Spectral distribution scheme: Use white LED with 20% photon flux (CRI70, 4000 K), 70% super red LED (660 nm) and 10% far red LED (730 nm).

The plants are illuminated from above similar to sunlight. The aim is to supplement natural daylight and raise growth light levels in order to
enhance photosynthesis and thereby improve the growth and quality of plants in greenhouses. Additional top lighting is already common with conventional light sources such as high-pressure sodium (HPS). The heavy power consumption and the heat of the HPS
luminaires make a large distance between the light source and the plants necessary. The photon flux of conventional luminaires can be up to 2000 μmol/s. LED luminaires do not usually provide a similar high photon flux from one luminaire but from several, more distributed luminaires with lower photon flux. The photon flux per luminaire may change significantly depending on the luminaire setup.

Using LEDs as a light source is a perfect solution to enable inter lighting. In this case the light sources are placed in between the plants
and the leaves. This reduces the shade of the leaves which may result from top lighting and thus increase the amount of light even on the
lower leaves. Unlike with hot HPS luminaires, the low temperatures of the LED luminaire do not cause any damage to the plants. Inter
lighting is considered as supplemental lighting since the LED lighting is typically used in greenhouses in addition to natural daylight.

In vertical farms, plant factories or multi-layer cultivation applications the crop is grown in layer one on top of each other. The light is placed directly above and in close proximity of the crop. This only allows “cold” light sources such as LED luminaires to ensure that the plants are not burned by the high temperature of the light source. Uniform illumination is necessary in order to achieve the even growth of the crop over the complete plant area.Due to the stacking of plant layers the plants grow completely under artificial light without any daylight at all. This is also referred to as sole-source lighting. This gives complete control over the timing, amount and spectral composition but also requires a complete light content. If people work under these lighting conditions a white light impression is necessary to enable the workers to assess the quality of the plants.

Consumer horticultural lighting – Grow Bulbs:
The grow bulbs can be used in various nonprofessional applications. The target is not primarily the rapid growth of the biomass but mainly to maintain and grow the plant under low light indoor conditions. In addition, a pleasant impression is preferred. Various white LEDs in different converter mixes are used for this purpose.
Consumer horticultural lighting – Grow Boxes: Grow Boxes address the lifestyle trend of home growing. Here the plants are grown completely under artificial light and under controlled conditions. The flexibility to adjust the spectrum and the lighting conditions to the different products is the key to this application. A broad range of various LEDs with different wavelengths is used to provide exactly the right lighting recipe for the illuminated product. Due to the new application and the significantly different setups and shapes, a typical value or setup cannot yet be determined.

Only the planting process can reflect the LED grow lights effect

What should be taken into consideration when choosing a car wash lighting?
Scroll to top